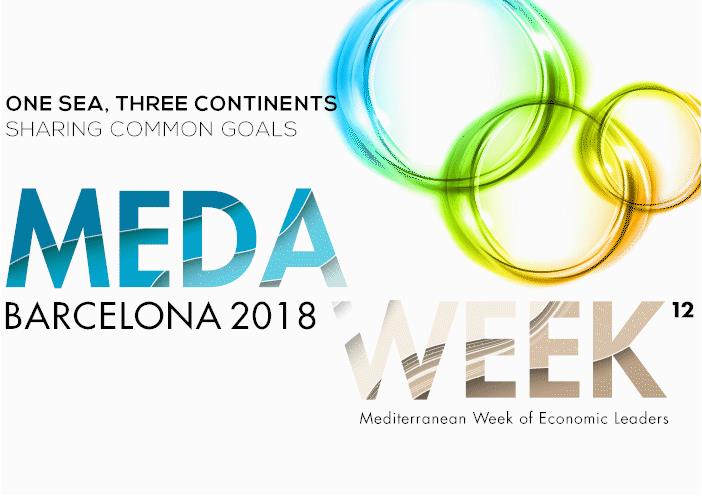 MEDAWEEK BARCELONA 2018
Under the slogan “One sea three continents: sharing common goals”, MedaWeek Barcelona 2018 is
organized by the Association of the Mediterranean Chambers of Commerce and Industry (ASCAME),
the Barcelona Chamber of Commerce, Industry, Services and Navigation, the Union for the
Mediterranean (UfM), the European Institute of the Mediterranean (IEMed) and Consorci de la Zona
Franca de Barcelona (CZFB) with the collaboration of other main Euro-Mediterranean entities working
in the field of the regional development.

The event is co-funded by the ERDF (European Regional Development Fund) International Promotion Plan Programme of the Spanish Chamber of Commerce.

MedaWeek Barcelona is an iconic economic conference in the region, convening governments,
multilateral organizations, and the business communities from Europe, the Mediterranean and
beyond. The event provides a dynamic platform for the promotion of business cooperation, as well as
a strong Mediterranean economic alliance through regional integration, with over a decade of
consolidated success and with an average annual attendance of more than 1,500 entrepreneurs and
organizations from across the globe.

This year’s edition will cover the three following objectives, with the central axis on innovation and
digitalization. First, make key players from the 3 continents that are part of the Mediterranean region
and their neighboring countries aware of their common goals and the necessity of developing
synergies. Second, to consolidate MedaWeek Barcelona as the regional entrepreneurial- economic hub
thus becoming the flagship platform for exchange, dialogue and regional integration. Third, provide a
gateway to network, do business and exchange points of view for the Mediterranean economic
growth. The event will provide ample networking sessions and business exchange opportunities for
companies and private sector representatives from all over the world. MedaWeek Barcelona is
constantly reinventing itself.