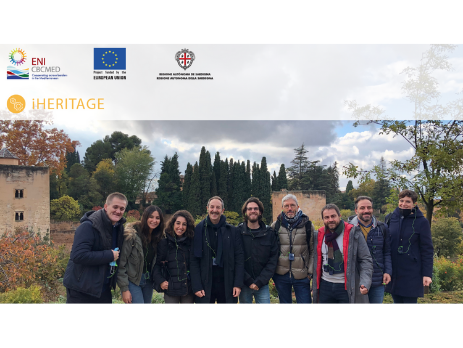 One of the primary goals of the European Union-funded iHERITAGE project is to use and highlight the valuable knowledge and innovative ideas of Mediterranean communities in the realization of its ambitious, game-changing activities and the integration of new technologies in the tourism and cultural valorization industries. iHERITAGE project partners have begun the activation of its Living Labs Program to establish industry-academic collaborations for the development of new products using the most recent available Information and Communication Technologies (ICT), such as Augmented, Virtual, and Mixed Realities to be used for the enhancement of the level of interpretation of Mediterranean UNESCO cultural heritage and commercialization of research results in Italy, Spain, Portugal, Egypt, Jordan and Lebanon. The project will establish 18 research agreements among universities, academics, scientists, and Small and Medium Enterprises (SMEs) within the Living Labs Programs, leading to co-patenting and commercialization of new technologies and innovative products for the tourism sector.

These activities and more were announced as the iHERITAGE project celebrated nearly one year of implementation by preparing the project’s second steering committee and the first in-person meeting in Granada, Spain, hosted by Spanish partners, El Legado Andalusí. The meeting took place in a hybrid form on the 22nd and 23rd of November 2021, with representatives of project partners from Egypt, Spain, and Italy meeting in the heart of Granada, while partners from Jordan and Portugal, as well as Mr Khaled Elsaadany, senior expert, and Mr Zied Kbaier, project officer of the Joint Technical Secretariat (JTS), in representation of the management of the EU’s ENI CBC MED Programme, attended and contributed virtually.

During the two-day meeting, partners were able to review project updates and forthcoming activities for the upcoming term of iHERITAGE implementation in the six nations, which included the activation and continuation of Living Labs Programs in all regions, the development of innovative goods and training, the execution of research agreements, and the creation of Augmented and Virtual Reality products within the project’s framework. Project Partners also announced ongoing intentions to build new spin-offs and enterprises that would follow the project’s practices and emphasis was placed on one of the most important responsibilities in the project’s planned operations is the capitalization and commercialization of new products and services to be produced under the project’s umbrella.

Partners visited the Alhambra, Generalife, Albayzín, and many other astounding neighbourhoods and monuments recognized by UNESCO as some of the most iconic standing cultural heritage sites to assess the need and opportunities for enhanced access to these world heritage sites and how the iHERITAGE project will help improve it. Partners were able to exchange visions on the integration of ICT services such as the creation of an ARcheo Cinema – which will allow users to “live” famous scenes from movies shot inside the archaeological site of Petra in augmented reality, including the famous “Indiana Jones” – to the SPACE-TIME ELEVATOR – an installation that leads you in a virtual lift moving through space and time among over 70 innovative products will be co-created, prototyped, tested, and commercialized within the Living Labs Programs and the entirety of the project.

The iHERITAGE project is co-financed by 90% by the ENI CBC MED Project with a total budget of €3.874.287,06 and has been recognized among the most strategically important projects of all 198 proposals presented throughout the Mediterranean basin. iHERITAGE is keen on supporting the creative industry and innovative startups in the six aforementioned Mediterranean countries, by providing funding to create new augmented and virtual content in our leading sectors: culture and tourism, as well as engage with local communities by providing free access to the Living Labs Program, which will be led by experts from all participating countries, as well as training, awareness-raising events, engagement seminars, and the opportunity to apply for a grant.

For more information about the iHERITAGE project please follow us on: